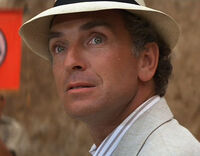 Doctor
Dr. Benson is an doctor from New York. He is a friend of Stanley Corda.

When Indiana Jones tried to find the missing professor, he searched the room of him, and found a letter where the following words were written down: "Dr. Benson, 14:30 Uhr" which translates into "Dr. Benson, 2:30 pm". Indy knew where he lived, because the doctor often came to his college. After that, a fight between FBI agents and Ramos' men broke out in the college. Indy fleed but forgot to take the letter with him. When he visited the doctor, he found out that Stanley Corda was a patient of him, and didn't appear to the operation. Benson gave him a letter from Corda who send it to the doctor. After that, he and Indy saw Ramos and two of Ramos' men coming to the house. Indy then beated the doctor, to made it look like that Indy stole the letter. Indiana then gave the letter to Ramos in order to get the two hostages of him free. It is unknown if Benson got killed by Ramos or survived.

→ This article is a stub. You can help us by adding to it. Check out the talk page for hints on what needs to be done.

Retrieved from "https://indianajones.fandom.com/wiki/Benson?oldid=82215"
Community content is available under CC-BY-SA unless otherwise noted.