"Like most stunt performers working for months on a movie, you will see me all over the place, fighting Indiana, falling of the bridge and getting blown up in a German truck."

Dickey Beer is a stunt performer who performed stunts as various Thuggee guards for The Temple of Doom and doubled as Kazim and appeared as a blown up German truck occupant in The Last Crusade. 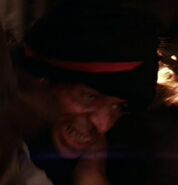 Retrieved from "https://indianajones.fandom.com/wiki/Dickey_Beer?oldid=69635"
Community content is available under CC-BY-SA unless otherwise noted.