"Dr. Jones, what you look at?"
This article would greatly benefit from the addition of one or more new images. Please upload a relevant image and place it here. Once finished, this notice may be removed.

"Who are you?"
The title of this article is conjectural. Although this article is based on canonical information, the actual name of this subject is pure conjecture. Please see the reasons for this title in the "Behind the scenes" section below, and/or the relevant discussion on the talk page. 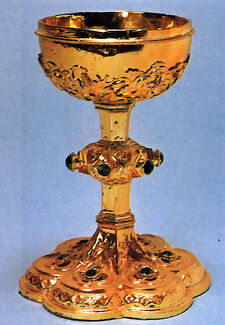 "But choose wisely. For as the true Grail will bring you life, the false Grail shall take it from you."
―the Grail Knight to Walter Donovan[src]

The false grail was a golden chalice encrusted with jewels. This large drinking vessel was taken from Constantinople by the Knights Templar and eventually ended up in the Grail sanctuary of the Temple of the Sun, where it sat near the Holy Grail, along with dozens of other false grails that sat upon the altar, all guarded by the Grail Knight[1]. .

The final test to prove one's worthiness to find the Holy Grail was to be able to correctly identify the real Holy Grail among the collection of other chalices and bowls set out as decoys. Once a seeker selected a grail, they would have to fill it from a font in the chamber and then drink from it. Water from any of the false grails would cause death to the poor crusader, while water from the true cup would grant eternal life.

In 1938, Indiana Jones was forced to enter the Temple to find the Grail in order to save his father, shot by Walter Donovan. Jones made it past the assorted traps and tests to enter the inner sanctum where he encountered the Grail Knight. After making it through, Donovan and Elsa Schneider followed into the chamber. Donovan]] asked the Austrian doctor which vessel was the true Holy Grail and Schneider purposely selected the shiniest false grail for him. After assuring himself that the false Grail was in fact the cup of the King of Kings, he filled it with water and took a drink from it, expecting eternal life. But to his horror, he instead began to age and then rot. Dropping the chalice, he raised his arms and tried to attack Schneider, but was pushed into the wall by Indiana Jones, leaving nothing but bones.

Jones then selected the genuine Grail and proved its authenticity by drinking from it and surviving. Needing the real Grail to save his dying father, Jones and Schneider ignored the golden chalice cast off to the side and returned to the entrance area of the temple.

Retrieved from "https://indianajones.fandom.com/wiki/False_Grail?oldid=46244"
Community content is available under CC-BY-SA unless otherwise noted.