In 1916, Det. Brady was assigned to the case focusing on the kidnapping of Dr. Thompson and the theft of plans for a car battery from Edison Laboratory by German agents. Following Thompson's rescue, the doctor stole the battery schematics himself, aiming to sell it to local oil companies. He attempted to escape in a prototype Bugatti sports car, however was forced to get out of the vehicle and flee through a field with the documents when Indiana Jones and Nancy Stratemeyer caught up with him, pursuing in a Model T. Frank Brady and Princeton police subsequently arrived on the scene and successfully arrested Thompson and secured the battery plans.[1] 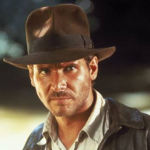