Indiana Jones and the Emperor's Tomb

Indiana Jones and the Emperor's Tomb

Indiana Jones and the Emperor's Tomb is an action game developed by The Collective Inc. published by LucasArts in 2003 on a variety of platforms.

In 1935, after an archaeological trip to Ceylon to find the Heart of Koru Watu, Dr. Indiana Jones is visited by Marshal Kai Ti Chang an official in the Chinese government, and his assistant Mei Ying. They tell him about the Heart of the Dragon, a black pearl buried with the First Emperor of China, and that evil forces are trying to steal it. Jones takes the case and is given his first assignment: to find the remaining two thirds of the Mirror of Dreams—having unwittingly recovered the first piece concealed within the idol—that will help him navigate the Emperor's Tomb.

Kai points him toward Prague and Indy heads off to a large castle rumored to be haunted. Once he's there, Jones sees that the Nazis are also on the trail of the Mirror and have sent many Gestapo agents to find the second piece. As Indy battles them, he solves numerous puzzles and finds some interesting things belonging to the castle's former owner. He also encounters the Homonculus in the castle's laboratory. After defeating it, Indy finds the second piece of the Mirror but he is captured by the Nazis after they ambush him with gas.

He wakes up in a cell in Istanbul, Turkey. The person who nabbed him was Albrecht Von Beck, a Nazi official who Indy had a scuffle with over the idol back in Ceylon. While awaiting certain torture, Jones is freed by Mei Ying, who was following him in secret. Indy makes his way to a ruined mosque where SS troops are excavating the subterranean palace of Belisarius. After contending with the Nazis and their hired Turkish-mercenaries, Jones battles and defeats a kraken and acquires the final piece of the Mirror of Dreams. Mei Ying reappears and reveals that she is an agent for the Chinese government. She explains that Kai is the secret head of the Black Dragon Fortress and had formed an alliance with Von Beck and the Nazis. When Jones recovered the first part of the Mirror in place of Von Beck, Kai double-crossed them to acquire the Heart of the Dragon for himself. Jones and Mei Ying join forces to prevent either group from getting the pearl and the pair head for Hong Kong.

While at the Golden Lotus Opera House, Mei Ying and Indy wait for a smuggler who will take the two to the Black Dragon Fortress. Mei Ying senses something is wrong and goes off. Indy looks to another box seat and sees Marshal Kai and his twin bodyguards, the Feng Twins. Mei Ying is attacked and captured by Triad thugs and Indy fights his way out of the opera house. On the streets of Hong Kong, Indy sees a man pulling a rickshaw. He introduces himself as Wu Han, the smuggler, and orders Indy to get on the rickshaw. As they move, Triad thugs in motorcycles and cars attack them. Indy fends them off with a machine gun and the two arrive at the docks. Indy and Wu Han see Mei Ying and Von Beck board a Nazi submarine and the ship heads off. Indy and Wu Han follow them in a boat to Peng Lai Island in the East China Sea. Indy goes off alone and infiltrates a Nazi submarine base. He then overhears Marshal Kai and Von Beck arguing with each other.

The way to get around the island is by gondola lift. Indy finds out that he needs a protected vehicle to reach them as they are heavily guarded. He can't find a way to steal one, or overcome the Nazis by surprise so after the meeting between Von Beck and Kai, he develops a plan. He manages to acquire a Nazi officer's uniform and a security pass, and this is enough to get him past the Nazi guard and transport up to the gondola station. When he arrives, he realizes that the Nazis have discovered that an intruder in a Nazi uniform named Indiana Jones is trying to reach the gondola systems.

He manages to hitch a ride on one of the gondolas, but he's attacked by German Messerschmitts, which he fends off with a mounted-machine gun. He is then at the gates of the Black Dragon Fortress 5,000 feet above sea level. He stealthily makes his way through, overpowering some guards and enters a room. Peeking around a corner, Indy sees Kai talking to Mei Ying, bound and gagged in a cage. Kai leaves the room and Indy moves in to free Mei Ying but the Feng Twins appear and pull out two sharp-tipped hand fans. Indy fights them and defeats them but his attempt to free Mei Ying is thwarted when a trap door opens beneath his feet.

After falling and sliding through a tunnel, Indy lands in an underground temple in the mountain. There he's attacked by Triad fighters possessed by evil spirits. Indy finds the Pa Cheng, a mystical weapon designed to destroy the spirits. He enters the temple and sees Kai and some Black Dragon warriors reciting a mystical chant to a chained Mei Ying. Kai puts the pieces of the Mirror together but is cut off by Indy's arrival. The temple area collapses and Kai and his men run out of the room, dropping the Mirror. Mei Ying suddenly transforms into a demon and attacks Jones. He destroys the spirit and frees Mei Ying. Grabbing the Mirror, the two run out of the temple and return to Wu Han. He then takes them to Shanghai, China so the pair can take a train to Xian where lies the Emperor's Tomb.

Indy and Mei Ying enter the tomb and find it crawling with triad members and the malevolent spirits of the Emperor's victims. There are also unseen booby traps which are illuminated by the Mirror of Dreams. During their journey, Indy is separated from Mei Ying and ends up in the terra-cotta maze. There, Indy hears a familiar voice over a loudspeaker. Suddenly the area quakes and a driller tank appears, driven by Von Beck. As the tank pursues Indy through the maze, he slides down a ramp and whipswings over a large bottomless pit. Indy looks back and sees Von Beck and the tank plunge into the pit. Moving on, Indy sees a portal.

He runs into it and finds himself in a underground cavern. Once again being harassed by spirits, Indy heads for the Black Pagoda, and finally sees the body of Emperor Qin Shi Huang. Remarking on the well-preserved corpse, Jones takes the Heart of the Dragon from the Emperor's mouth and the corpse comes to life. The Emperor laughs and starts invoking a spell. Indy runs out of the Emperor's crypt and loses the Heart because he cannot control its power. Kai appears, takes the Heart, and brings some terra-cotta statues to life to attack Indy. Mei Ying comes to Indy's rescue and together they confront Kai.

Kai imprisons Mei Ying and is seen levitating through the air, surrounding himself with a force field. A large dragon appears at Kai's command and Indy finds himself dodging both Kai and the dragon's attacks. Indy, with the Pa Cheng, runs to several small pagodas and charges his weapon with energy. He then throws it at Kai, causing him to drop the Heart. Suddenly, Kai is attacked by spirits who believe him to be the Emperor. Indy and the now freed Mei Ying run back into the portal while Kai is destroyed by the dragon.

Back at the opera house in Hong Kong with Wu Han, Mei Ying congratulates Indy and they both move to leave together. Wu Han reminds Indy that they have a job offered by Lao Che, to find the remains of Nurhachi. With Mei Ying as company, Indy tells him Lao Che can wait.

After discovering all of the artifacts, the player has access to the art gallery which includes unused concepts.

For the Xbox version of the game, on the main menu when it says "press start", hold down both triggers during the following: First press the D-pad in the following directions, up, up, down, up. Then press the following buttons, A, X, A, B, the move the D-pad up and down, the press the Y button, and then press start. If you did it correctly, you'll hear a short jingle. The effects of the cheat are infinite health and infinite ammo. Just repeat this process to disable it. If Indy falls to his death in the game, the game freezes, just press quit and it will go back to the main menu.

At the end of the story, when Wu Han reminds Indiana Jones about the Lao Che job, if you have subtitles on, you can see Nurhachi is misspelled "Nurhatchi". 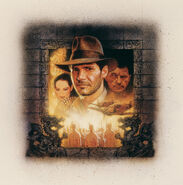