The IndyCast is a regular, unofficial Indiana Jones podcast hosted and produced by Ed Dolista from Victoria, Australia. The show reports the latest news, collectibles, interviews, events, opinions and trivia from the Indiana Jones fan community. It began on November 15, 2007 in the lead up to the release of Indiana Jones and the Kingdom of the Crystal Skull and has frequented the iTunes TV/Film Top 50 and New and Notable sections as well as listed in the Huffington Post as one of the Top 10 Geek Podcasts You Should Check Out Now. Today, the show is heard in over 50 countries.

In 2017 the IndyCast celebrated it's 10th anniversary with meet and greets at Disneyland, Washington DC, Connecticut, New York and Walt Disney World.

Correspondents include Official IndyCast correspondent Mitchell Hallock, a frequent contributor to The Raider.net Dan Z, The Official Unofficial Fan Club President, Laird Malamed, who offers insight on The Young Indiana Jones Chronicles from his perspective as Assistant Sound Editor on the production of the series, Joe Stuber and Keith Voss with a segment covering Marvel Comics' The Further Adventures of Indiana Jones, and the Area 51 segment with Les David, where Dolista and David discuss Indiana Jones collectibles.Bite sized trivia bits with Ron Longo. Retired segments include Rob Magee's Indy Opinion fan poll and Indy Trivia from Patrick dePoortere. New segments include IJ in the UK with Chris A, The Expanded Archives of Doctor Jones with Morgan and Chris and an Indy outfit segment with Indiana Mic. The Magic of John Williams specials are also included with Ron Longo and Laird Malamed.

Show notes and downloads can be found at official IndyCast website, theindycast.com and at forcecast.net.

Produced by the crew of the IndyCast, the IndyCast Radio Drama Series is a series of unofficial Indiana Jones audio adventures in the style of old-time serials. It has included comic adaptations and original fan fiction stories. The audio dramas have been published as special edition releases of the IndyCast.

In addition to the radio dramas, the series has also featured one read-along style adventure, an unofficial enhanced podcast audio release of an Indiana Jones comic which allows listeners to read along in the comic pages as they hear the events acted out.

Indiana Jones and the Lair of the VampireEdit

Indiana Jones and the Lair of the Vampire is an original story written by Keith Voss which was produced as an unofficial audio drama for the IndyCast Radio Drama Series. It was originally released on December 14, 2009 as part of episode 90 of the IndyCast. It was re-released as a stand-alone edition of the IndyCast on August 2, 2010.

Indiana Jones is held prisoner in Flensburg, being subjected to a brutal interrogation. He cannot remember what he was being questioned about, but as he comes to after having passed out he begins to realize that he is tied up with no chance of escaping the interrogation room.

Then, a Nazi agent enters. His voice immediately jolts Jones back to recognition. As the Nazi threatens to continue the interrogation, Jones searches for any glimmer of hope and hears what he thinks may be gunfire or an explosion in the distance.

As the Nazi begins to interrogate Jones further, he identifies himself as "The Vampire," a nickname he states was earned by his appetite for the blood of his victims. After this gruesome realization he demands that Jones reveal the location of the Ark of the Covenant. Jones refuses to reveal the information.

Meanwhile, the explosions and gunfire were growing closer, but The Vampire is oblivious in his rage. As he prepares to execute the uncooperative Jones, the door bursts open and The Vampire is shot. Jones' savior identifies himself as "McHale...MI6."

This fan fiction states that the story takes place in 1942 and offers a concept for the first meeting of Indiana Jones and George "Mac" McHale, who would later appear in Indiana Jones and the Kingdom of the Crystal Skull.

It was the first entry in the IndyCast Radio Drama Series. The story was written by Keith Voss and the production was edited by Ed Dolista.

Indiana Jones and the Temple of YearningEdit

Indiana Jones and the Temple of Yearning radio drama is the second entry in the IndyCast Radio Drama Series. The story was adapted from the six-page comic of the same name, which was released on May 2, 2009 as part Dark Horse Comics' Free Comic Book Day 2009. The adaptation was written by Keith Voss and was released as a stand-alone episode of the IndyCast on May 3, 2010.

The plot closely follows the comic book. The most noticeable change is stating that Clifford's last name is Bates.

While the original comic does not identify the date of this adventure, the radio drama sets the story in 1939, which is the earliest possible year that the reference to Thailand (rather than Siam) would be correct.

The adaptation of the story for the audio production was written by Keith Voss and the editing was done by Rob Magee. The story was narrated by IndyCast host Ed Dolista.

Indiana Jones and the Gold GoddessEdit

Indiana Jones and the Gold Goddess radio drama is a two-part audio adaptation of the Marvel Further Adventures of Indiana Jones comic book "The Gold Goddess" (issues 9 and 10) produced as the third entry in the IndyCast Radio Drama Series. The adaptation was written by Keith Voss. Part one, which covered the events of issue 9, was released as a stand-alone episode of the IndyCast on January 10, 2011 and then re-released with improved audio on May 23, 2011. Part two, which adapts the events of issue 10, was released on September 26, 2011.

Indiana Jones and his trusted ally, Sallah, are attempting to retrieve the Chachapoyan fertility idol in Marrakesh. As they work to retrieve it, with Sallah lowering Jones into a dark storeroom, they realize that someone else has beaten them into the room and murdered Saad Hassim. Jones is able to retrieve the idol from the two masked and robed thieves and toss it to Sallah, but is forced to make a quick escape to the streets when the thieves attempt to shoot him.

After nearly being run down by other assailants in a car, Jones escapes back to the rooftops. There, he and Sallah once again must elude the thieves by jumping from one roof to the next and eventually down into the back of their rented cargo truck, which they are then able to get away in.

Back on the rooftops, the two thieves remove their turbans and reveal themselves to be a beautiful blond German woman and a fearsome Hovitos warrior named Xomec. The woman vows that they will retrieve the idol and kill Indiana Jones.

Three days later in New York the Diamond Eye nightclub hosts a fundraising gala to benefit the Connecticut's National Museum. Curator Marcus Brody and Marion Ravenwood, along with several reporters, anxiously await the arrival of Indiana Jones, who finally enters the event carrying the golden idol. Marcus takes possession of the priceless artifact and heads off to place it in its display.

Once inside the display room for the idol, Brody finds himself trapped and confronted by a group of Hovito warriors, led by Xomec, who demands the return of the idol.

Back outside the display room, the reporters begin to knock on the door and request Marcus to allow them in to see the idol. Xomec fires two shots into the door, injuring one of the reporters on the other side.

Realizing that he cannot enter the display room through the door, Indiana Jones opens a window and climbs onto the ledge, 23 stories up, and attempts to retrieve the idol and rescue Marcus. He sees the Hovitos exiting through the window of the display room and makes his way along the ledge towards them. But when one warrior fires a blowdart at Jones, he nearly falls from the building before being pulled back in by Marion.

After Marion goes back inside the nightclub, another Hovito comes and confronts Jones, and in the attack they both lose their balance and fall over the edge, with Jones grabbing hold of the ledge at the last second as the warrior plummets to his death. As Jones attempts to pull himself back up, another Hovito comes around the corner of the building and begins stomping on his hand. Jones is very close to losing his grip as part one ends.

As the Hovito warrior is about to stomp on Jones' fingers one last time and send him plummeting to his doom, Marion shoots him in the chest and he falls from the ledge. She pulls Jones up, and he attempts to catch up with Xomec. But as he crawls across a ladder which spans the gap between two buildings, Xomec pulls the ladder out from under him and Jones falls towards the streets below. As he falls he is able to grab onto a flagpole protruding from the building and avoid death. Marion throws a rope down to him and they return to the nightclub.

Back inside, Brody is on the phone with a German woman who demands that Jones come alone to a specified location and deliver payment for the idol.

Jones travels to Manaus, the location in Brazil which the German chose for the exchange with the help of his friend, Captain Gustavo Cruz, captain of the steamboat S.S. Williamson. After docking, Jones traverses the jungle until he arrives at an abandoned opera house. There he is attacked by a group of Hovito warriors, who stab him with a poison-tipped spear. After Jones falls unconscious, Xomec directs the Hovitos to place him on the stage of the opera house.

After coming to, Jones is confronted by the same blond-haired German woman who attempted to kill him in Marrakesh. She identifies herself as Ilsa Toht, sister of Arnold Toht, whose death during the Ark of the Covenant affair she holds Jones responsible for. Ilsa reveals that she has been tasked by the Nazis to retrieve the idol in order to incite the natives to an uprising which would cripple the American rubber interests in the area, thus limiting the war production. Toht directs Xomec to eliminate Jones.

Jones is taken to the Amazon riverbank, where he is tied out and left to be eaten by crocodiles. However, he breaks free from his bonds and subdues a large crocodile by tying its jaws closed.

Hearing an airplane starting farther up the river, Jones heads towards it and sees Ilsa and Xomec get on board. Jones is able to jump onto the wing just before it takes off, where he defeats Xomec when the warrior attempts to attack him with Jones' own bullwhip. Jones then is able to retrieve the idol from the cockpit and send the plane into a steep dive, jumping off just before the plane crashes into the river and explodes. He swims to shore and admires the idol before journeying back into the jungle to return to Captain Cruz.

The story is set in the year 1936, not long after the events of Raiders of the Lost Ark. Jones trip to Marrakesh connects to his statement in the film that René Emile Belloq would have to attempt to sell the idol there.

The adaptation for the IndyCast was written by Keith Voss, edited by Rob Magee, and narrated by IndyCast host Ed Dolista.

Indiana Jones and the Curse of the Death MaskEdit

Indiana Jones and the Curse of the Death Mask is the first IndyCast Read-Along Adventure. The source material for the audio drama is the 4-page comic Facing Death!, which was published in the United Kingdom as part of the first issue of Indiana Jones and the Lost Treasures magazine. Using enhanced podcast technology, it allows listeners to read along in the comic as they hear the action acted out. It was released as a stand-alone episode of the IndyCast on February 14, 2011.

The audio drama takes from the comic word-for-word. 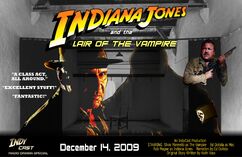 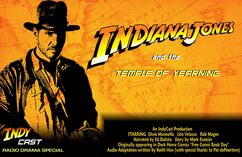 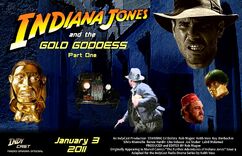 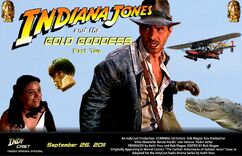 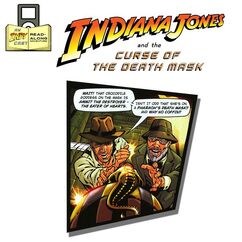 Retrieved from "https://indianajones.fandom.com/wiki/IndyCast?oldid=88308"
Community content is available under CC-BY-SA unless otherwise noted.