J. Leon Pridgen II is an actor and author who played both Doctor Jeffers in the bookend segments for "German East Africa, December 1916" and "Congo, January 1917" (later edited into Oganga, The Giver and Taker of Life without those segments) and CJ Williams in Young Indiana Jones and the Mystery of the Blues. Pridgen was credited as Jeffers in Oganga, The Giver and Taker of Life despite his scenes being cut.

Beyond The Young Indiana Jones Chronicles, Pridgen's other television appearances include the TV movies Assault at West Point: The Court-Martial of Johnson Whittaker (with Josef Sommer), Trinity Goodheart, and Remnant; and guest roles on Army Wives, Revenge (with Amy Parrish), Homeland, Single Ladies, Let's Stay Together, Nashville, Secrets and Lies, Queen Sugar, and P-Valley. His feature film credits include Rich in Love, Renaissance Man, LUV, Careful What You Wish For, Captive (with Steven Dean Davis), Chasing Grace, and Discarded Things.

Several productions in which Pridgen appears feature other actors who were in Young Indiana Jones and the Mystery of the Blues, including the TV series Greenleaf (starring Keith David), the TV movies Nightmare in Columbia County (Mark Jeffrey Miller and Amy Parrish, along with Butch Slade and Marty Terry) and Moment of Truth: Caught in the Crossfire (Lou Criscuolo, along with Richard K. Olsen), and the feature films Children of the Corn II: The Final Sacrifice (Ed Grady, along with Joe Inscoe and Marty Terry), The Program (Jim Fyfe, along with Mike Flippo), and Blood Done Sign My Name (Lee Spencer, along with Lee Norris and Marty Terry, in a film written and directed by Jeb Stuart). 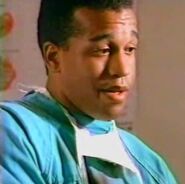 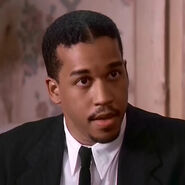 CJ Williams
Add a photo to this gallery

Retrieved from "https://indianajones.fandom.com/wiki/J._Leon_Pridgen_II?oldid=95570"
Community content is available under CC-BY-SA unless otherwise noted.