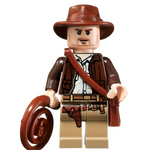 There are also six other sets based on the fourth movie.

The sets from the the fourth movie are the River Chase which involves Indy, Marion, and an amphibious vehicle. It also includes a boat, a new dark green crocodile and tree outpost. The Jungle Duel is between Mutt and Spalko as Indy battles "giant ants near the breakable table, food supplies and tent". Indy and Mutt are near the entrance to a skull-like cave while evading a soldier in a Jungle Cutter and Colonel Dovchenko, and Indy has a bazooka to stop it in its tracks. The climax of the film in the Temple of the Crystal Skull includes many tricks, traps, and playability. Indy and Mutt must solve the puzzles of the temple before Spalko does. The final set, Peril in Peru, includes a few Russian vehicles, a captured Indy, Mutt, Spalko, Dovchenko and Russian soldier, as well as another eerie crystal skull!

The Brickmaster set includes Indy and a small green jeep-like car. And the last set which is unkown and was a special prize at comic-con includes a hill, some natives, Indiana jones, and his jungle cruiser. The hill has a giant skull on it with a jewel on its forehead.

Five new Lego Indiana Jones sets were released in the summer of 2009: 7195 Ambush in Cairo from Raiders of the Lost Ark which includes Indiana Jones without jacket (only shirt), Marion Ravenwood with the dress she wore in Cairo, a ninja in white clothing with a machine gun, a swordsman in black clothing with a sword, a fruit shop, a wagon and a basket.

7196 Chauchilla Cemetery Battle from the fourth movie which includes Indiana Jones, Mutt Williams, A Conquistador Skeleton, 2 Chauchilla Warriors, the cemetery, a scorpion, a golden treasure chest and a Crystal Skull.

7197 Venice Canal Chase from Indiana Jones and the Last Crusade which includes Indiana Jones in a suit with red tie, Elsa Schneider, 2 Grail Guardians with fezes, two boats and a dock.