The Crystal Skull is alleged to have many supernatural powers.Indiana Jones

The Mitchell-Hedges Skull (also known as the Crystal Skull of Lubantuun[1], "Skull of Doom", and Skull of Ah Puch) was a crystal skull recovered by Frederick Albert Mitchell-Hedges in the mid-1920s. Indiana Jones kept lecture notes on the discovery.

Shaped from a single block of quartz into the perfect replica of a small human's cranium, the Crystal Skull that became known as the Mitchell-Hedges Skull predated the civilizations that developed in Central America, including the Maya and Olmec. Conjecture had it that the Skull was actually Atlantean in origin but perhaps even existed prior to that and the other antediluvian civilizations.

Nevertheless, the skull did eventually fall into the possession of the Maya, with a priesthood/cult known as the House of Skulls which emerged around the year 700 with the belief that the artifact was the Skull of Ah Puch, the god of sacrifice. The priests claimed that the skull could focus the user's thoughts to kill.

A polytheist society, the Maya were fearful that the cult's devotion to one deity would bring conflict between the gods upon the very Earth itself. In response, a small secret society named in honor of the feathered serpent god Kukulkan, the House of the Serpent, grew to undo the threat of the House of Skulls. War broke out between the two Houses and after more than a century's worth of fighting, the fued ended with a climactic battle at a temple in Lubaantún, British Honduras that brought down the entire structure and wiped out both factions. The Crystal Skull was lost around that time until it was found by British explorer Frederick Albert Mitchell-Hedges in the mid-1920s. While it was said the actual discovery was made by his adopted daughter Anna, Mitchell-Hedges claimed the Skull and was credited with the find.

Indiana Jones and Harold Oxley were obsessed with the Mitchell-Hedges Skull when they studied together at the University of Chicago. Fascination with the Skull stayed with Oxley into his adult years and he was particularly interested in its supernatural properties.

Some time prior to the outbreak of World War II, the Crystal Skull was stolen from Mitchell-Hedges but it was eventually recovered by a group of adventurers.

When Harold Oxley went missing after finding a crystal skull from Akator in 1957, Indiana Jones and Mutt Williams visited a sanatorium in Nazca, Peru where Oxley had been kept. On viewing the depictions of the elongated skull in Oxley's cell, Jones observed that it wasn't the Mitchell-Hedges Skull.

An unproduced episode of The Young Indiana Jones Chronicles was written for the show's third season that would have featured the Mitchell-Hedges Skull and helped strengthen the ties between the TV series and the movies. In this planned episode, Indy was to have his first encounter with René Belloq while the two were archaeology students in university together, and they would discover a crystal skull while on an archaeological field trip in Central America. In the story, Belloq steals the skull and sells it to Mitchell-Hedges, thus igniting both the legend of the Mitchell-Hedges skull and the years of rivalry between Indy and Belloq. The novelization of Indiana Jones and the Kingdom of the Crystal Skull appears to preclude the possibility of the events of this episode having taken place; during the diner scene in which Indy discusses the skull with Mutt, the narrative specifically describes the skull as having been found by Mitchell-Hedges in 1926, and even notes that Indy "had been trying to get a peek at the skull for years" but had been rebuffed. The actual film, however, is less specific in relating the skull's history, with Indy mentioning simply that he and Harold Oxley had been obsessed with it in college (and later noting that Oxley's carvings of the Crystal Skull of Akator on the walls of his room in the Nazca sanatorium were clearly not of the Mitchell-Hedges skull). This suggests the film continuity (if not the novel) is compatible with that of the unproduced episode, though it doesn't offer any specific support for it. 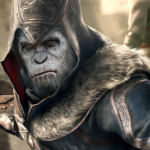