The Second Man was a Gestapo agent who was given the task of capturing Marcus Brody in Iskenderun in 1938.

His partner, the Sinister Man, told Marcus Brody that the Director of the Museum of Antiquities had sent a car for Brody, before the two men joined each other.

Sallah Mohammed Faisel el-Kahir warned Brody that there was no museum in Iskenderun. Overhearing this exchange, the Second Man immediately demanded to see some papers. Sallah repeatedly told Brody to run while he distracted both agents with a newspaper. However Brody was slow to catch on, only realizing the potential danger seconds before Sallah punched the Second Man and knocked him into a vendor's stand, then knocked the Sinister Man into another stand, before unknowingly getting Brody captured himself by sending him into a darkened doorway with a curtain which turned out to be the back of a Nazi troop truck.

The Second Man was portrayed by an uncredited Dickey Beer in Indiana Jones and the Last Crusade.

There were deleted scenes from Last Crusade which were included in the comic book adaptation that expanded Sallah and Marcus Brody's unsuccessful attempts to outrun the Sinister Man and Second Man. One action involved Sallah slapping a camel and causing it to spit mucus all over the Gestapo agents, while another saw Sallah fighting them.[1] 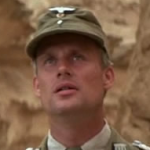