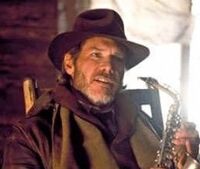 "Well, things can't always be the way you want them to be."
This article or section contains information about a scheduled or expected future product. It is likely to contain information of a speculative nature and the content may change dramatically as the product release approaches and more information becomes available.

An as yet untitled Indiana Jones video game is currently in development by Bethesda Softworks' studio MachineGames in collaboration with Lucasfilm Games.[1]

On January 12, 2021, Bethesda Softworks posted on its Twitter account a teaser video featuring what seems to be Indiana Jones' study featuring items which include a passport, a ticket to Rome stamped in October 1937, a map of Vatican City and books about Mesopotamian mythology, ancient circles with a reference to a jubilee and "forbidden stones."[2] The teaser was followed up with another Tweet, announcing that a new Indiana Jones video game is currently in the works by Bethesda's studio MachineGames in collaboration with Lucasfilm Games. The game will feature an original story and will be executive produced by video game designer Todd Howard.[1]