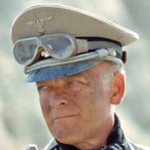 I am a huge fan of Colonel Ernst Vogel. Hence, the name. I have been collecting numerous items relating to Colonel Vogel, and quite personally, he is my absolute favorite charachter of all time. I have all of his membrobillia, most recently purchasing his Swagger Stick from one of Steven Spielbergs Costume workers on the last crusade. Colonel Ernst Vogel Rules! In addition, I make it my goal to edit all pages relating to Nazis and German officers, as I have an extensive history and study of German Society during World War II, and have had numerous teaching jobs involving World War II Germany, at a number of universities. On this Wikia, you will find that my contributions to the pages of German Commanders and German Locals will be extensive. I very much look forward to contributing to the Indiana Jones Wikia! Go Ernst Vogel!!

All Pages related to Nazi's & Germany-

Retrieved from "https://indianajones.fandom.com/wiki/User:Standartenfurher_Ernst_Vogel?oldid=69730"
Community content is available under CC-BY-SA unless otherwise noted.